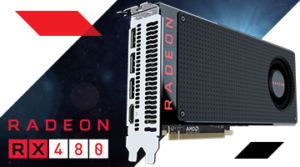 GPU’s are only useful for mining Altcoins (for bitcoin mining, see ASICS).  AMD offers a wide range of GPU’s that you can easily integrate into your rig.  And with the newer drivers, they are easily detected on windows even with custom bios mods.  They usually offer the best price/hash ratio, and the new rx400 line are very power efficient.  There are reference designs (with a blower fan) and aftermarket designs (with dual or triple fans).  On top of that, some have different memory – hynix, samsung and elpida – which impacts mining performance.  Currently the best algorithms to mine with AMD gpu’s are Equihash (zcash) and Dagger-Hashimoto (Ethereum/Ethereum Classic).

Hashrates may vary according to bios mods (see how to section) and specific model.